What you need to know about the ‘New Suez Canal’

What you need to know about the ‘New Suez Canal’ 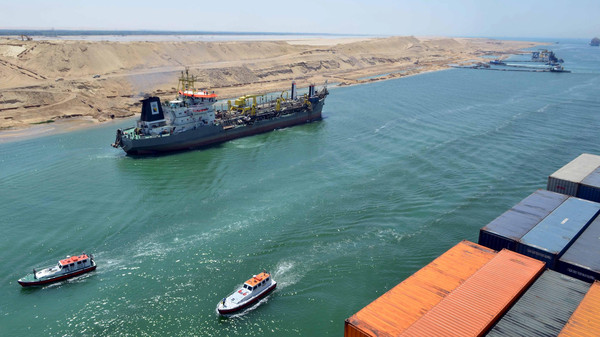 With major celebrations planned and a new stamp being issued, Egypt is just a day away from inaugurating the “New Suez Canal,” with hopes the project will boost the economy and increase the number of ships using it every day.

A ceremony will be held on August 6 to inaugurate the first section of the new canal project. The first trial run of the new waterway took place last week, when several container ships passed through the new route amid tight security.

Here’s everything you need to know about the project:

A new lane was created to run alongside part of the existing Suez Canal, one of the world’s most important trade routes, as as part of Egypt’s “New Suez Canal”  project.

The army began construction on the new lane less than a year ago. The new route runs part of the way along the existing canal connecting the Red Sea to the Mediterranean.

The brings the overall length of the project to 72km.

Infographic: What you need to know about the ‘New Suez Canal’ 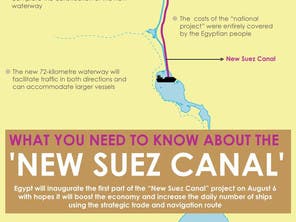 Egyptian President Abdel Fatah al-Sisi launched the project in August 2014 with hopes it would boost Egypt’s ailing economy, which has been suffering of years of political turmoil.

The new expansion is part of an ambitious plan to develop the surrounding area into an industrial and commercial hub that would include the construction of ports and provide shipping services.

The project is expected to double the revenues of its strategic canal over the next decade and create more job opportunities. 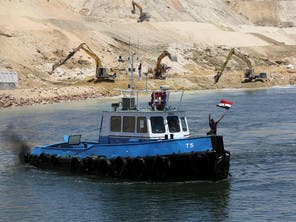 Why is it significant?

The original Suez Canal – a vital source of the Egypt economy – allows vessels to travel from Europe to Asia through the Sinai Peninsula. The 163-kilometer-long waterway provides a one-way traffic.

The new branch  will facilitate traffic in two directions and can accommodate larger vessels. It also aims to reduce the waiting period for transiting ships. 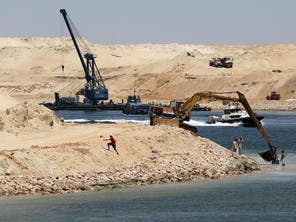 Sisi demanded the construction of the new waterway to be completed in one year.

Touted as a “national project,” the costs were entirely covered by Egyptians. Authorities managed to raise $9 billion by selling shares in the project to domestic investors. Bank accounts were also set up to collect donations from Egyptians.

On Wednesday Egypt announced it had completed the “New Suez Canal” project and that a lavish event, to be attended by Sisi, would be held next week to commemorate its opening.

“We declare that the new Suez Canal is safe for all kinds of vessels,” Suez Canal Authority chief Mohab Mameesh told a news conference in the canal city of Ismailiya.

“We call on all the international maritime carriers to use the current and the new Suez Canal. Your navigation is safe.”

Most Egyptians hail the project and hope it would salvage the country out of its economic troubles. 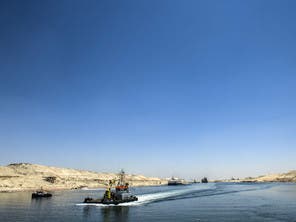 A picture taken on July 29, 2015 shows boats crossing the
new waterway at the new Suez Canal in the Egyptian port
city of Ismailia, east of Cairo. (AFP)