TALES OF AN OLD TOURIST

Home/TALES OF AN OLD TOURIST
Previous Next

TALES OF AN OLD TOURIST 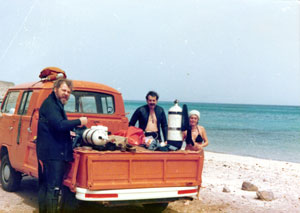 It is the year 2006 and you are sitting at the hotel bar looking forward to a dinner in a fine Restaurant, followed by a night in the Pacha Disco or another hot address in Sharm.

That could be the evening of any modern tourist in Sharm, but 35 years ago that was a complete different story:

The Israelis were occupying the Sinai, and had built some houses in the city they called Ofira at the Sharm El Sheikh (sharm being the name for a big open bay in Arabic).

And they had opened the first hotel in Naama Bay, the Helnan Marina.

The only tourists coming there were few lucky members of the than small group of sport divers.
They could find only three points to rent a tank south of Eilat: in Nuweiba, Dahab and Sharm El Sheikh.

In the Red Sea Divers Guide of that year, 1975, none of the now famous dive spots up and down Naama were listed, just dives in Nabq and in Ras Mohamed. The dive description for the Shark Reef started with a swim of 2 km in ‘’shark-invested waters’ (!) to reach the dive site…. That were the times, when my father came here for his first Sinai holiday 1974, followed by many more until today: 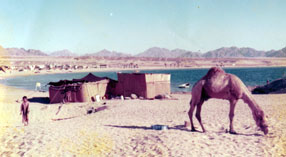 Tales of an old Diver:

I started diving in the early seventies and was hooked immediately.
So when I heard 1974 of the wonders of the coral reefs in the Sinai, I booked a flight to Tel Aviv immediately.
From there I got a bus to Eilat with its diving centers. But I wanted to see the whole coast. So I asked around for a way to go south and found an old VW pick up bus for rent.
Whit this bus I had no problem to find dive buddies, as few backpacker tourists were already around, keen on getting a ride south.
With a Swedish, Swiss and Israelis divers in the car, we went slowly south until Ofira/Sharm El Sheikh, where the first little comfort could be found. 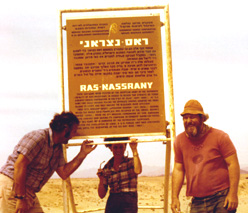 Construction site at Sharm El Sheikh (now El Taijib Restaurant), 1974. In the background the construction of the Cinema, now a public library. 1975

We used the “Red Sea Diving Guide“ by Sholmo Cohen to find dive spots, rented tanks wherever possible and slept in, next or under the VW truck.)

One year later I went again, this time with my non-diving wife and the same rented bus.
Thanks to her I could make drift dive, she ditched me at some place, wherever it looked like a nice dive, and drove with the bus to the expected exit point, where she waited for me. You can say that she was not afraid of being all alone in wide spaces….

Sometimes I found the car when I came up, but not my wife: While I was under water, some Bedouins passed by, and invited her to their tent for some tea and (slightly suspicious) cigarettes, both of which she always enjoyed. 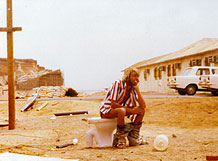 In the years to come, she often waited for me on lonely beaches, and we got stuck together in soft sand, while looking for a new dive spot, or slept in or under our various rented cars.

Once she spent a whole day in the cafeteria of the Helnan Hotel Sharm, at that time just a very basic bar with a very basic service, while we were searching the wrack of the Dunraven:
That was in 1975. I had found another diver as buddy, and we had met a group of Austrian divers in Ras Mohamed. My buddy complained about the place to be too crowded, and that we should try to get off “the beaten track”.
We had heard that some Bedouins would know a wrack in the Gulf of Suez, and we decided to get there. We met them, they agreed to take us, some money changed owners, and off we went to the Keys the next morning, leaving my wife and the spouse of my dive buddy at the beach bar of the Helnan Marina, just for “2 hours”.

But when we arrived in Ras Mohamed, we got first a cup of tea, and than bad news: the engine of the small motorboat was broken. Mafish mushkela, they had a spare engine in their camp in Naama. After some tea drinking we all went there with our car, and, after a tea break, the engine was taken from the spare boat. Some more tea and all of us plus the spare engine got back in the car and to the Keys.

Just one tea break and the guys put the new engine to the boat, and only a few more teas later we went out.

Meanwhile it had become a dawn dive, but we were nevertheless exited by this old wrack with its huge glassfish school at the broken bow. I still don’t know, whether we were the first one to dive on the Dunraven,but we surely felt like real explorers!

My wife and her friend were not too happy, when we came back late in the evening, but than she was used to it. Chaotic dive planning was quite normal at this time, without modern Divermasters and their briefings.

In the eighties our Sinai dive holidays became more luxurious, when the Hilton opened its Fayrouz hotel in Naama Bay, and we could fly in via Cairo instead of Israel.

And now, in the second millennium, we hardly can believe that we are still at the same piece of the world, quite understandable, when you look at the pictures, isn’t it?