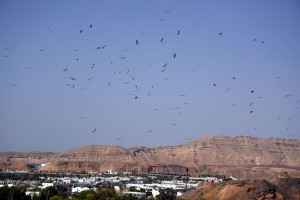 First flock of White Storks spotted today over Old Sharm on its way to south migration to central Africa.

The White Storks are currently on their voyage across the Sinai Peninsular. Sharm is on the migratory path of storks coming from Eastern Europe. Approximately 500,000 storks are supposedly about to fly across the region, many of them resting for a night at Ras Mohamed. Very few research projects have been undertaken, but the storks are definitely something that Sharmers should be aware of.

The majority of storks that breed in Europe spend the winter months in sub-Saharan Africa, migrating north in early spring, and returning to the south come late summer.
White Storks seldom use flapping flight, which means that they cannot cross the wide range of the Mediterranean and must travel around instead. The heavy storks conserve energy by gliding instead of actively flying all day. Flying at approximately 20 to 30 miles per hour, gliding is also faster than flying. Two routes dominate the migration, the Western route across the Straits of Gibraltar and the Eastern route over the Jordan Valley, crossing the mountain range during part of the day and continuing southward along the Dead Sea towards the Sinai. 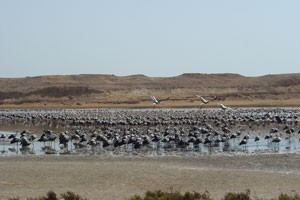 Nowadays we mainly spot them in the proximity of the mangroves of Ras Mohamed. Another sighting some years ago was at Tower, but due to mass construction sites this resting point is unfortunately gone for ever. Usually the storks seen in the Sinai are in a relatively tired state, after their long flights. The summer migration back to Europe will begin in early February.

*Remark : the author Omar Attum is responsible for the content of this article. The number of storks on the eastern flyway is estimated to be close to 650.000 individuals. Early in the 20th century the routes of migrating storks were described for parts of the Egyptian mainland and Sinai. Also in that period were the storks passing near El Tor.