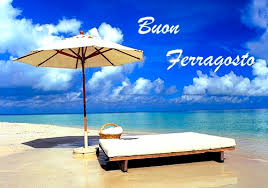 Ferragosto is an Italian and Sammarinese public holiday celebrated on 15 August, coinciding with the major Catholic feast of the Assumption of Mary. By metonymy, it is also the summer vacation period around mid-August, which may be a long weekend (ponte di ferragosto) or most of August.

The Feriae Augusti (“Festivals [Holidays] of the Emperor Augustus“) were introduced by the emperor Augustus in 18 BC. This was an addition earlier ancient Roman festivals which fell in the same month, such as the Vinalia rustica or the Consualia, which celebrated the harvest and the end of a long period of intense agricultural labor. The Feriae Augusti, in addition to its propaganda function, linked the various August festivals to provide a longer period of rest, called Augustali, which was felt necessary after the hard labour of the previous weeks.

During these celebrations, horse races were organised across the Empire, and beasts of burden (including oxen, donkeys and mules), were released from their work duties and decorated with flowers. Such ancient traditions are still alive today, virtually unchanged in their form and level of participation during the Palio dell’Assunta which takes place on 16 August in Siena. Indeed the name “Palio” comes from the pallium, a piece of precious fabric which was the usual prize given to winners of the horse races in ancient Rome.

During the festival, workers greeted their masters, who in return would give them a tip. The custom became so strongly rooted that in the Renaissance it was made compulsory in the Papal States.

The modern Italian name of the holiday comes directly from the Latin name.

From Wikipedia, the free encyclopedia