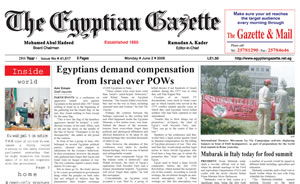 It was set and printed in Alexandria as a four-page weekly tabloid. The newspaper was founded by five Britons including Andrew Philip as Editor, and Moberly Bell who later became Managing Editor of The Times of London.

In the 1930s, Cairo became more important as a news centre than Alexandria and the newspaper’s offices were moved to the Egyptian capital on February 28, 1938.

Just before the World War II, The Gazette had passed to the ownership of the Societe Orientale de Publicite, in which Mr Oswald J. Finney, a wealthy British businessman, was the major shareholder. This tie-up meant that The Gazette became associated with another English language newspaper the Egyptian Mail already owned by S.O.P. The Mail, which was established in 1914, from then on shared the English-speaking market with The Egyptian Gazette. The Mail appeared in the morning and the Gazette in the evening.

With the ending of the war and the departure of the bulk of British troops, there was no longer a market for two English-language dailies. Therefore, the "Egyptian Mail" became a weekly, appearing on Tuesdays when The Egyptian Gazette was not published. This situation still obtains.

The Egyptian Revolution took place on July 23, 1952 and in May 1954 the ownership of S.O.P was ceded to Al Tharir Printing and Publishing House, The Gazette’s present owners.

In 1954, with the appointment of Mr Amin Abul Enein as Managing Editor, the newspaper found itself for the first time under the authority of an Egyptian.

Mr Abul Enein died in September 1978 and was succeeded by Mr Ramez Al Halawni. On Mr el-Halawani’s resignation in 1980, Mr Sami el-Shahed took over until 1989. He was followed by Mr Mohamed el-Ezabi, who steered the helm of The Gazette until 1991. Mr Mohamed Ali Ibrahim became the Editor-in-Chief and held editorship until July, 2005. Its incumbent Editor-in-Chief is Ramadan Abdel Kader.