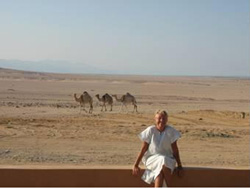 Hope this finds you all well. Collo tamam. I am trying to learn Arabic but it’s not easy is it? I don’t really want to get bogged down with anything remotely grammatical (I’m still struggling with apostrophes so don’t even mention glottal stops) but I just want to make myself understood when I’m out and about.

I was in Metro one day (aren’t we all at some time or another) and was searching for some Flora margarine, as you do. I looked on the shelf where I normally found it but it wasn’t there. I wandered up and down every aisle but to no avail. Eventually a little guy in a red stripey shirt came up and asked if he could help me. Yes please! I told him Flora margarine. His eyes lit up and he disappeared. I waited for a few minutes. He came back. With a box of tissues. I gave up.

That’s one thing I’ve learned about living in Sharm. When you see it, buy it. The next time I saw Flora on the shelf (I’ve told her there’s still plenty of time to find Mr Right so not to worry) I grabbed six packs. I once went in six supermarkets to find HP sauce. I know I’m sad but I’m also far too old to change my ways. And did you hear about the great baked bean shortage in Sharm?

Back in England I loved peas: frozen petit pois flavoured with mint. My favourite veg. Scrummy. I was thrilled to find them here. No mint but I’d cope. I stocked the freezer with them. Big mistake. I’ve tried putting them on to boil on Thursday and dishing them up on Sunday but they’re still like bullets. I have a freezer full of unwanted frozen peas. My motto now is Try Before You Buy. (Reminder: if the sprouts are the same I’d better put them on now so they’re ready for Christmas).

Anyhoo, I turned to baked beans. And they’re not easy to find are they? Every other sort but not baked and in tomato sauce. Until the day after Metro’s stock take. Bingo! Tins and tins of them. Twenty two in all. I bought the lot. Actually I didn’t keep them all for myself. My friend Donna at Café Picasso was also in dire need so we shared them. I have them with everything. I wonder if that’s why I’m turning a rather delicate shade of orange!

Talking of Metro, as we were, has anyone else noticed how the prices have crept up since they opened? And how the place is very dirty and smelly? And how a lot of the food is not very fresh? And how some of the frozen food has obviously defrosted and been re-frozen? And how there’s much less choice now? And how lots of the stuff appears to have been opened? I could go on and on but I will refrain. I am sure you all have your own stories to tell.

I remember the night it first opened. We were ecstatic, overjoyed, cock-a-hoop. I stood next to a guy who was absolutely euphoric over the big fresh salmon in his basket. Well he was easily pleased wasn’t he? I thought then what a sad lot we were to get so excited about the opening of a supermarket. But what a pity our excitement was so short-lived. Do you think if we all spoke with one voice – preferably a very loud and shrill one – they might take notice and perk up their ideas a bit? Let me know what you think?

I go to the Old Market a lot. I expect you do to. What do you say when the shopkeepers call out and ask you where you are from? I’ve tried saying Nabq but no one seems to have any idea where that is (other side of the airport, keep going and it’s just before you fall into the sea). I’ve tried saying Venus as in Men Are From Mars, Women From Venus but that just drew blank looks. So now I just say Chipping Sodbury!

But I have found the answer to their question ‘What Are You Looking For?’ Tell them Expanded Polystyrene. It leaves them speechless!

By the way, you’ll be pleased to hear I got a Stetson for the o/h. I had it flown over especially from the UK so he’s a v v happy bunny now. He’s not so much cool dude, more John Wayne – big, bow-legged and looking for his horse. But don’t tell him that because he’d be mortified!

Before I go and sweep up the dead flies, did you hear about the blonde who was swerving all over the road and driving very badly? She got pulled over by a policeman who asked her why she was driving so recklessly. She said that wherever she drove there was always a tree in front of her and she couldn’t seem to get away from it. The policeman said: ‘Madam, that’s your air freshener!’