Home/News/Labor Day in Egypt
Previous Next 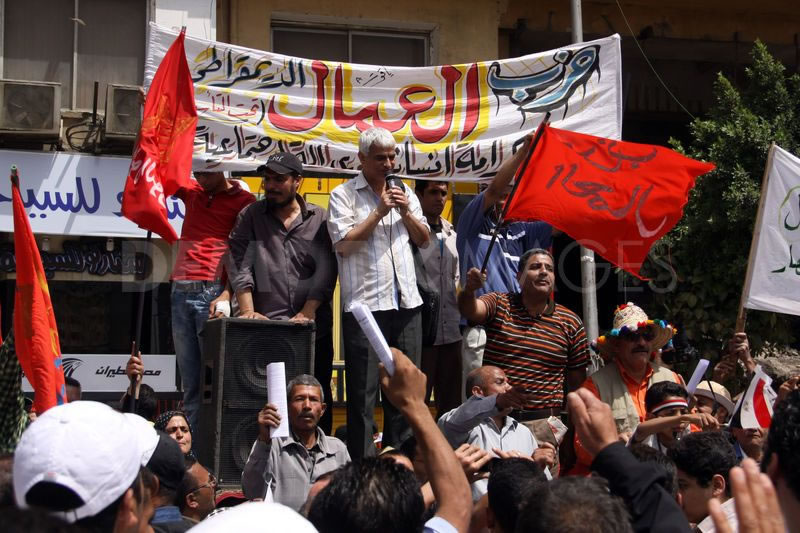 May Day, celebrated by socialist and communists all over the world since the late 19th century, was officially embraced by the Egyptian state in 1963 under Nasser, following a massive wave of nationalizations in 1961, and the founding of the Arab Socialist Union in 1962.

Nasser’s populist regime viewed Egypt’s working class as a necessary partner in its attempt to economically break away from colonial dependency and achieve self-reliance. During the 1960s the conditions of the Egyptian working class witnessed a great improvement in terms of wages and social benefits.

Nationalisation, however, is not the central demand of workers who have in the spirit of May Day, been making vehement calls for better working conditions and an increase to the minimum wage, currently at LE400 ($70 a month), demanding at least LE1,200 ($200 a month).

According to a 2010 report by the Solidarity Center entitled “The Struggle for Workers Rights in Egypt”, the basic monthly minimum wage was set in 1984 at LE35 or about $6 at the current exchange rates.

After much pressure by workers and legal action by Nagi Rashad, a worker at the South Cairo Grain Mill, [who] sued the government over its 2008 decision not to increase the national minimum wage, the minimum wage was increased in October 2010 when the National Council for Wages decided to push the wage up to the current LE400 ($70 a month) which is just above the World Bank’s moderate poverty threshold of $2 a day.

Calls for better wages and working conditions are at the heart of May Day’s origins. The history of May Day stretches back to the late 19th century when US workers’ struggled for an 8-hour work day. The conditions of workers was dire with days stretching on for 16 hours or more in hazardous environments as men, women and children died in the thousands — many in their early twenties.

In 1884, the Federation of Organized Trades and Labor Unions, the predecessor of the American Federation of Labor, announced in Chicago that by 1 May 1886, 8 hours would constitute the legal work day.

Two years later on what would later become May Day, hundreds of thousands of workers took to the streets across the US, peacefully demonstrating for social justice. Within days, violence broke out and police began shooting into crowds of civilians. The “Haymarket affair”, which saw several people die, ended in the public hanging of four of the event’s organizers.

These events and the subsequent celebrations of the “Haymarket martyrs” deaths eventually led to marking May 1st as international workers’ day.

In recent Egyptian history, May Day would traditionally see Nasser give a presidential speech, highlighting the importance of social justice and the necessity of increased industrial production.

The president, generally attending celebrations in one of Egypt’s focal industrial towns, would hand out his 15-day bonus to the great pleasure of workers who would interrupt their leader, chanting slogans of support and calling for further social rights.

Under president Anwar Sadat and even more so under Mubarak, the celebration become less and less about social reforms and more about the vanity of the state.

In an interview with Al-Ahram Weekly ahead of the 1999 May Day celebrations, Kamal Abbas stated, “[The annual bonus] is LE120 this year. Some people will get it in bulk as it was always dispensed. However, this year it also became optional for management to pay the amount in LE10 monthly instalments. It is like putting an end to the idea that this day should be celebrated at all. It defuses the relevance.”