Home/Magazine/IMPORTING A CAR
Previous Next 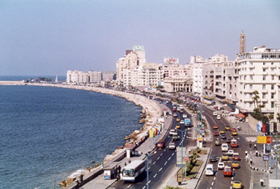 You want to listen for about 30 days, every day the words INSHAALAH and BOKRA? Go to a governmental office and try to solve something.

And if you want to get close to madness and loose a lot of money, try to bring your car from Germany to Egypt.

Maybe I was stupid or naive, when I thought:
I have my life here in Egypt, why should I not bring also my car.

I got all the information about the rules and what had to be done. I did everything needed accordingly.
Than I brought my car to a company in Frankfurt…signed the contract…and left the car with the key at the place. Of course I was a little bit astonished about the contract, which included that the insurance does not cover “signs from God” (God will take the car????), “problems with Aliens” (HA????), “rules of Kings or Presidents or other activities”????? My car should have left from Frankfurt via Antwerp to Alexandria and was supposed to arrive June 29.

On June 30 I went to the Port of Alexandria with my papers, to pick up my 10 year old, lovely VW Golf Cabriolet, with the big 2000cc engine and a lot of crazy extras. I paid 15 LE to enter the port and I saw my car. Everything was ok; no “signs from God” on it, neither an “Alien” inside nor a King had been interested in my car. The meaning of other “activities”, you will understand later. The only problem I had was that they needed some days to check the car and some papers were missing.

Believe it or not……2 months later…yes its true…2 months later, after having spent about 35000 LE and 50 telephone-cards, I was again standing in front of the Port of Alexandria. With me 4 persons, -my father in law, a police officer, -Ahmed from Alexandria, whose business is to solve port problems for 800 LE per day, – Ahmed, the mechanic and – a friend who translated everything for me. We entered the port, before we had paid …of course!

In this moment the word other “activities”, showed me its real meaning! I quickly woke up, when I realised that a man was about to remove 5 kilos of sand with a dry piece of cloth of my black metallic car. Maybe I can forgive that of 4 wheels, 3 are destroyed. Maybe I should accept that they stole all the lights, the CD-player, the radio, the seat-cover and the mirror. But what I can’t forgive, that they kept the car for these 2 months in Alexandria with the top open. Half of the desert moved from the Sinai into my car. How a normal thinking human can deal like this?? Sorry I speak about other “activities”. Sure I know that they had opened the car to use it, I had 500 km more on the speedometer than before, but if they are clever enough to open the top, why nobody was clever enough to close it again.

In this crowded moment, Ahmed the mechanic started his work. Half pushing, half driving – we did move the car to the next office to take new shinning numbers for a destroyed car. It would be a miracle, if we did not face the next problem there. Somebody had erased the engine number! It needs, of course, money and a big smile (what was after all this not easy) to find a man, who make the numbers again inside. Believe it or not….every movie ends. My private movie is not called Paris – Dakar with Jutta Kleinschmitt, but Frankfurt – Sharm with me! At least the man of the garage, who repaired and cleaned everything were happy and I am sure that his family and all the relatives got new clothes, after I paid and returned back to Sharm.