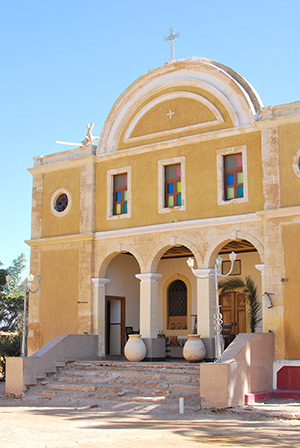 The St George Monastery, though rather stern and straightforward at first sight is, with its beautiful gardens, an oasis of tranquility and spirituality. These days, renovations take place which, however, should be completed by Easter (Orthodox Easter), i.e. 5 May 2013. A small church within the complex gives evidence of a tremendously rich heritage. The church is full of gold(en) plated statues and picture frames which were gifts by traders from St. Petersburg.

The City of El Tur, formerly called Raitho, used to be a harbor city back at the Phoenician times. The name means “land of fruits”, because of the many date palms in the area – then and now. The place had a large Greek Orthodox community of traders and belonged to the Archdiocese of Sinai.

Raitho, identical with the Biblical Elim, was the place where Moses and the children of Israel found seventy date palms and twelve springs of water (Exodus 15:27). From the late third and early fourth century, it had been the site of monastic habitations. At about 378 AD, forty monks were killed here by the Blemmyes, Bedouin tribesmen. Their death is commemorated on January 14th each year. In the succeeding centuries, monastic life flourished at Raitho, and in the seventh century, it was John, Abbot of Raitho, who wrote to John, Abbot of Sinai, asking him to compose his famous book, ‘The Ladder of Divine Ascent’. The lavra (caves fro hermits) at Raitho was destroyed in the eleventh century by fire. The cause of this fire remained unknown. Excavations have uncovered extensive ruins belonging to a former monastic complex.   The death of the monks, religious martyrs, did not prevent more monks and spiritual ascetics from coming to this region. Another holy place was built next to the harbor. This monastery was destroyed by the Mamluks any time between the 16th and 17th century.  The St George Monastery as we know it today was built in 1736, but had to be raised three times owing rising sea levels. It is named after Monk Gregory who helped re-establish the Monastery at Raitho in 1827, together with Monk Prodhyrios. The Church of St. Georg was founded in 1885 also by Monk Gregory. In the 19th century, during archaeological excavations the relics were discovered unharmed.

During the first years of the War of 1967 against Israel only one monk remained in place. But then he too was called back to St Catherine‘s for safety reasons. St. George is a dependency of St. Catherine.  The monastery remained without monk until 1992. Nowadays two monks live at the St. Geore Monastary. At the original location of the ‘seventy date palms and twelve springs of water’, now known as Hamam Moussa, is now a newly renovated monastic shrine with a garden and date palms.

For those who wish to experience the monastery in depth, seven guests rooms are available, which, however, need to be reserved in advance. The monastery is open daily from 9 am to 12 noon, except on Greek Orthodox holidays and on Friday’s and Sunday.