Home/Sharmer – The film
Previous Next 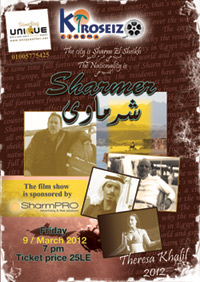 Sharmer is the first documentary film about life, people in Sharm El Sheikh, which is a cosmopolitan touristic city by the Red Sea located in South Sinai, Egypt, contradicting with the  conservative  country it’s located in.
The film begins in the times the city was under the Israeli occupation and the changes it went through up till now.â€¨Old Sharmers, Bedouins, Mixed relations, Egyptians and foreigners, the east and the west and how they mix on the land of South Sinai and more issues.

Theresa Khalil is the Director of the film. She is an Egyptian moved to Sharm 5 years ago and found that life there wasn’t as she was expecting and started discovering things which were an eye opening to her, when she had the idea of making the film which may help others in understanding things about life in Sharm that they may not be aware of.

Why a film about Sharmers?
Sharm El Sheikh is famous for being a touristic city and all the films which were shot before were mainly concerned about the city’s touristic attractions like beaches, hotels, excursions etc
As a new city being added to the cities of Egypt within the last 25 years, it was so important to make a film that shows how the city began and what kind of people it attracted from all nationalities including Egyptians and foreigners who mixed on this land and explain to them through this film the differences between the cultures and maybe answer some questions they were wondering about and hoping to find an answer for.

Who are Sharmers?
This what the film is trying to discover, the word Sharmer seems to be a nationality of those people who chose to live in that special city located in South Sinai, and which always had a strict security system which made it like an isolated country with a special nature.

What topics the film is discussing?
The film discusses the contradiction between Egyptians and western cultures, and the effect it has on mixed relations, Bedouins and their life as a neglected part of the city’s community, Real estate investment, business challenges and success stories, the efforts made by the locals to protect the city, and many other issues related to the real life of people in Sharm and the city itself.

How can people watch the film?
A 9 min trailor can be seen on youtube under the name “Sharmer 2012”. It has registered a very high view rate and many people asked to watch it in full.
The film is one hour and a half which made it possible to make a show in Kiroseiz cinema in Kiroseiz hotel in Naama Bay on Friday 9th of March 2012 at7 pm, ticket price is 25 LE

Who is Theresa Khalil?
I’m originally a computer Engineer, who chose to work in advertising I studied cinema as a hobby, and was mainly concentrating on script writing, as I write short stories and preparing to publish my first book.
My first film was kids talk in 2008 which was shot by a mobile camera, and was shown in Sakia film festival in Cairo and Chashama film festival in NY USA 2008, was also published on the BBC website for around 6 month.
I moved to Sharm to escape from the crowded and polluted Cairo, and hoping to start living in a free city that doesn’t follow the restrictions of the Egyptian traditions as I thought Sharm was westernized as it’s full of foreigners. I started noticing an important fact that Sharm is at the end an Egyptian city.