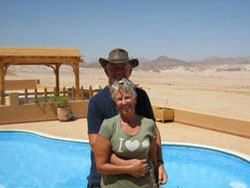 Back again! Doesn’t time fly when you’re having a good time? Mind you, out here Time is a funny thing. Several times I’ve been told about weeklies that come out fortnightly and monthlies that come out quarterly and some things that never come out at all.
And it never fails to make me smile when I go in to pick up the TV listings magazines and find they won’t be available till around the middle of the month. I can hardly contain my excitement at all the good films I’ve missed!
And how many times do we get told something will only take one hour? Which hour? The hour before dawn; the midnight hour; the rush hour; the happy hour? And why is every hour at least 90 minutes long?

And can someone tell me when Soon is? I’ve seen so many big posters around town announcing various shops will be opening SOON! I’ve seen signs for Next, the Body Shop and Virgin Megastore; I heard that Twenty Four Seven was opening in Nabq in August. Anyone spotted them yet? If so, please let me know.

But my favourite is After Tomorrow. I haven’t got the slightest idea when it is and neither have they. But when they ask me when I will be back to buy the dress/shoes/handbag I always tell them that it will be After Tomorrow. And it usually is.

We recently had Hubby’s number one son over for a week’s R&R. We spent much time showing him the sights of Sharm. The Old Market was his favourite. But he couldn’t believe how difficult it was just to do a spot of shopping. How many times did we have to tell people that we are residents, we live here, so don’t even think about charging us tourist prices. Everywhere he went I had to go to. Just to do the haggling. And just for a key ring and a bottle of coloured sand. I was so exhausted by the end of the week I needed a lie down.

And today I wanted to buy a blanket because the nights are getting chilly. Not a particularly difficult thing to do one would have thought. But the first shop I went into wanted to charge me two arms and two legs. Did I come up the river on a banana boat, Doris? The second shop wanted an arm and a leg. Were they having a laugh? The third shop wanted an arm and my left buttock. This was all getting a bit personal but I was in a hurry and it was a double so we did the deal. It’s a good job I’m off on my hols tomorrow because I need a rest. (Actually Hubby is taking me on a short cruise – twice round the Jacuzzi – to celebrate my umpty dumpty birthday but I’ll tell you all about that next time).

I know haggling is supposed to be part and parcel of life out here but lots of people just find it so intimidating. A good friend of mine who’s lived here for years was just mooching down the street when some guy actually grabbed her arm and tried to pull her into his shop. Wow! Not a good move. She’s not a woman to be messed with. I think he’s still recovering from the tongue lashing.

Actually she really is not a woman to be messed with. I know because she is my golfing partner. She has been playing for years and is pretty good. I have been playing for about five minutes and am pretty useless. But we both love the game and play regularly. The thing is she is very competitive. I just pick out the club with the biggest head and wack the ball as hard as I can. And sometimes I even manage to hit it. Other times the wretched ball is still just sitting there. My friend just effortlessly swings her club and the ball travels miles. More often than not she nips off quickly to get her roots done, her nails manicured and her eyebrows plucked and waxed whilst I am still trying to get my first shot off the tee (that’s the little wooden thingy you stick your ball on top of by the way). By the time she gets back we’ve both arrived on the green (that’s where the hole is by the way). Now with a bit of luck and a following wind she will have scored about 4 shots (or whatever the terminology is) and I will have taken around 27, if I’m having a good day, to get the ball in the hole. She then spends the next ten minutes working out the law of averages, the distance to the moon and back, the speed of light, how many ounces there are in a pound and finally tells me that she’s won that hole. Well, darn my breeches, you could have knocked me down with a feather, fancy that! And this happens at every hole. And you don’t even want to hear about what happens when I lose 8 balls in the lake. It gets really complicated then. Anyone for tennis? Anyway, the best part of the game is the 19th hole and it’s usually her round!

Better sign off now otherwise the ship will leave without me. But before I go, did I tell you that Hubby went to the doctors the other day and asked for something for wind. The doctor gave him a kite.

There’s a nip in the air!