A JOURNEY TO THE MOON

Home/Magazine/A JOURNEY TO THE MOON
Previous Next

A JOURNEY TO THE MOON

We left Cairo at 8 am, to the oasis Bahariyya, 420 km southwest of Cairo, the outset for our safari in the magnificent western desert of Egypt.
After we left the Cairo suburbs behind, the surroundings became dull and monotonous. Only close to Bahariyya the ground opened all of the sudden: an enormous valley with a complete different landscape appeared, with mounts and strangely formed mountains.

We drove down and followed the road to one more checkpoint, Bahariyya was in sight – finally!
We had enough time to visit the museum with its gold mummies, the tombs of Zed Amun Ef Ankh and his son Banentiu, and for a stroll in the huge palm forest of Bahariyya. Refreshed with the water of a gurgling spring and dates gathered directly from the palm trees we went back to the hotel to get the much needed rest for the next day and our desert adventure: 3 days offroad without hotel comfort, but in the wilderness of the desert and the serenity offered by a million stars above you.

With two Toyota Jeeps and a group of seven persons, including two experienced desert guides from Bahariyya, we got on our way. And just after we made a few kilometers offroad the first car got stuck in the sand. “Everybody out and push!” That was the first time we heard this order, but not the last. Just on that day it sounded six more times. Well, that is to be expected on a desert trip.
On our way to the target of the day, the Big Dune, we passed an incredible landscape, with ever changing colors, from black to white to a light pink. Later in the afternoon we stood in awe in front of the huge sand mountain, extending 800 km in length, the longest sand dune in the world, as our guide Hussein explained. But also its height is enormous. While we still discussed, how we could climb it, we heard the command “Get in!”– we were driving up! Wow, that was fun: you can’t describe the feeling of racing up a sand hill in a four-wheeler, just to slither down on the other side after a short photo stop. A bit like watching TV, a bit like being in a roller-coaster.
The camp was erected close to the dune and after a tasty dinner we were looking forward to our first night under the stars.

We were expecting to see mountains where else would you expect to find a cave, especially an incredibly big one?! So we were very surprised, when we stopped in the middle of the plain, where a huge circle marked by stones was the only outstanding mark in sight. Only 10 meters further into that circle the earth opened up – a crack, around two meters and a half wide and one meter deep, the entrance to the cave named ‘Djara’.
We had to enter squatting down, or sliding on our buts down the soft sand through the inconspicuous low entrance until we reached the bottom of the cave, around ten meters deep in an enormous enclosure with stalactites and stalagmites everywhere. A nature extravaganza, brought to ‘light’ with the help of a portable generator and eighty meters of electric cable, the sight took your breath away!
The stone markings we saw were delineating the roof of the cave to prevent heavy trucks from driving above. We lingered long in the cave, careful percussion of the stalactites with light metal objects made them sing to us and then we finally wrote our names in visitor log books that we found there.
Few meters outside the cave, Hussein drew our attention to flintstone tools lying around. Sure enough, it did not take much effort nor time to identify several such pieces dating back to the stone age.
Heading to our night camp we drove past a grave. A grave in the middle of nowhere. What is it doing here? “It’s the grave of the caravan leader”, Hussein explained. It put us in a contemplating mood and our minds wondered, how many lives accompanying caravans, which cross the desert up to this day, men and camels, remain in the desert and never reach their destinations.
The looming car problem did not let us wait too long: just a tire change on Hussein’s Toyota. It actually surprised us, that tires don’t get punctured and slashed more often, considering the rocky terrain and sharp stones they crawl over for hours no end.
A beautifully consuming sunset and a small desert mouse created a light and relaxed atmosphere in our night camp and another magnificent fairy tale night in the desert passed. 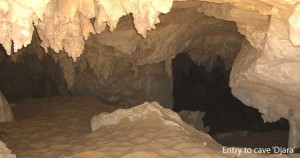 The road to the highlight of this trip, the White Desert, leads us to drive our Toyotas over the rim of an elevated plateau then plunge down into very deep and steep sandy slopes leading to a wide depression. The assumption, that these depressions were once covered by water, was confirmed by finding several fossilised sea shells.
For the second time, Hussein needs to change a tire. The situation could become critical, as all the spare tires have been used now. A car would need to stay behind, while the other would be sent to repair the tires.
We remained optimistic and carried on to find a small oasis in an uncompromising desert. ‘Magic Spring’, a small green mound covered with grass, a few palm trees and plenty of water. Man made basins collect the water from the spring. A place to bathe, wash and to relax… lovely!
We got closer to the White Desert and the region became visible, someone commented in disbelief: “Oh my God! It’s like being on the moon!”. As far as the eye could see, we discovered snow-white chalk formations ranging from monoliths to giant mushrooms stirring the imagination of the viewer. A rabbit, a grail, a seated lion and the profile of a sultan were depicted. Our finds on the ground indicated, that this terrain was once covered by a vast body of water. A spectacular sunset and a visit by four friendly desert foxes to our camp paved the way for an unforgettable evening and night in one of the most intriguing landscapes on our planet.

After that magnificent night in the White Desert, where we thought we could almost reach out and touch the stars, we woke up half a sleep clinging to our cameras and wondering on foot capturing the unique light display in this location as the morning sun climbed up in the sky. The desert foxes managed to steal our guides sandals, though he was the one adamantly warning us about them stealing shoes and even mobile phones just the night before. He should have known better… we did, and hid our shoes either in the tent or inside the sleeping bag.
Following breakfast, we left the White Desert with heavy hearts. As we departed, we could not stop looking back at this spot with its unique beauty. We headed towards Farafra. This small oasis with 2500 inhabitants is thinly populated with hospitable, friendly people greeting their visitors.
Our small hotel surprised us with a swimming pool! A refreshingly wonderful feeling after all the heat and sweat to jump into a cool body of water and enjoy. The afternoon we devoted to visiting the old part of the village and spent the remainder of the day in a local artist’s museum.
In spite of the luxury of a shower and a bed, we could hardly wait to get back to the desert and carry on with our scheduled probing of its nature on the following day.

On the way back to Bahariyya, we knew the path was going to lead us to El Aqabat. A wonderfully scenic and picturesque valley surrounded with towering whitish brown monoliths taking every imaginable shape and size. The ground is sandy with large areas of snow-white chalk. An absorbing landscape that leaves one yearning for a long stroll to allow the senses to feast.
Back on the asphalt street, we could see from a distance the last attraction on our trip right on the road side between Farafra and Bahariyya, though not so apparent to the untrained eye: the Crystal Mountain. Only closer observation reveals that the whole mountain is made up of mountain crystals. One more fascinating highlight of this desert, unfortunately, the last one planned for this trip.
We spent our last night in the lively oasis Bahariyya and then headed back to Cairo.

It is hard to express your feeling when you know it is time to depart and leave this exhilarating desert behind. You know, you have to let something go but at the same time you want to hold on to that something. A sense of longing and a deeply rooted wish make you want to go back. Homesickness? Maybe. It is not only nature, but the people dwelling there, that bring around the realization, that desert has become a home.